La Scorta – You Can’t Lose With Him 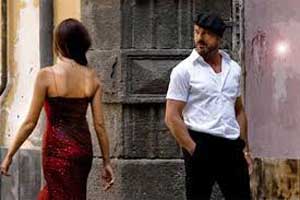 In American gangster movies, the Mafia usually appears in loud, showy images. Within approaches as different as the high opera of the first two Godfather films (or the feeble comic book of The Godfather, Part III) or Martin Scorsese’s sprightly dance-of-death realism in GoodFellas, the dons and soldiers of La Cosa Nostra parade their brutality and vulgarity, sentimentalize their feelings for their domestic and their criminal ‘families,’ and essentially draw the viewer’s emotional interest to themselves, not to their victims or to the society they manipulate through their primary resource: the fear of death. In La Scorta (The Bodyguards)–set in the Sicilian port city of Trapani–director Ricky Tognazzi has produced a film about the Mafia from which the killers themselves are almost totally absent–except for distant figures fleeing on a motorbike and a single turncoat gunman, briefly interviewed and glamorless. The power that can kill exists as tension and fear in those who are threatened, compliance and fear in the bureaucrats and politicians who bow to it.

Tognazzi–son of comic actor Ugo Tognazzi—dealt in his last film, Ultra, (winner of the Golden Bear at the 1991 Berlin Film Festival) with a grim contemporary problem, both Italian and European–the neofascist youth culture energized by racism and marked by fanatic devotion to local soccer squads. La Scorta springs from another major Italian process–the wave of investigations of the Sicilian Mafia (and to a lesser degree other organized crime groups in southern Italy) fueled by recent years of crisis over governmental corruption. The Mafia has responded with a wave of public assassinations, the most famous and flamboyant being the killing, two years ago, of Judge Giovanni Falcone, his wife, and three police bodyguards through a bomb in a highway tunnel, detonated by remote control as his car was on its way to the Palermo airport. Tognazzi’s film loosely draws its story from an earlier situation (in 1989) of a northern magistrate assigned to a Sicilian investigation; but clearly, for the filmmaker and writers, the film is charged with the memory of those three bodyguards, blown to bits, their names remembered only by families or within the police.

The bodyguards of La Scorta are four carabinieri, members of the militarized national police, assigned to provide the protective escort (scorta) for Judge De Francesco, who has arrived in Trapani to replace another investigative judge murdered along with his single carabiniere guard. They are the focus of the film–their feelings, their personal lives, their growing, almost filial, solidarity with the judge from the north who treats them with respect and who, when it becomes clear that the local authorities cannot be trusted, turns them into his investigative team.

Three of the carabinieri are Sicilians, the other a mainland southerner, reflecting the traditional preponderance within the force of southerners from relatively poor families. All of them understand the extreme danger of their assignment, but come into it at first from different angles and with different levels of commitment. Only the passionately angry Angelo has requested it, because his friend was the murdered police guard. Fabio, the non-Sicilian, begins as the least enthusiastic, seeing only the prospect of a meaningless death and asking for reassignment. He and Angelo live in the carabinieri barracks while Andrea, who commands the unit, is a family man with young children, assigned an apartment not quite large enough for them all. Played by Enrico Lo Verso–who was also the well-meaning young carabiniere in Gianni Amelio’s sensitive update of neorealist style, Il Ladro di Bambini–Andrea is a tender husband and father but one for whom, at the outset, family considerations outweigh higher loyalties. He is at first willing to pass on some information about the judge’s investigation to a local bureaucrat, who dangles the promise of a better apartment before him. Later he will confess his action to the judge and be forgiven and respected for his honesty.

Raffaele, the fourth bodyguard, is looking forward to his marriage to a woman who works in a pastry shop. The two times he meets with her–one by night, one by day–begin with a brightly lit panning shot of a showcase of sparkling Sicilian pastries. The second appearance of the pastries is followed by the only long sequence in bright sunlight, the bodyguards relaxing at a beach with Andrea’s family and Judge de Francesco’s young daughter. They are among the very few moments in the film where light prevails.

Otherwise the film is almost all shadows, night, interiors, overcast skies in normally sun-drenched Sicily. La Scorta begins in the darkness of a rainy season twilight, with clouds gathering over the ocean, and it ends in the darkness of night. Threat from the skies–in the scene before the credits–hangs over an old man in a dark room who is preparing a meal. As gunfire sounds outside and the old man runs downstairs in anguish, we find that he is the father of the police guard who has been killed along with the judge he was protecting–the event that will bring De Francesco to Sicily. Not only does this scene initiate the kind of symbolic lighting which runs throughout the film but it also sounds the motif of domesticity threatened. For in La Scorta, the dinner tables around which friends commune are the province not of the Mafia but of the honest people they menace.

Tognazzi’s most powerful achievement in this small but strong film is the creation of a mood of relentless menace, without melodrama and without strain. Pulsing through the constant shadows and the threat of rain are the hairtrigger reflexes of the bodyguards and the dance of their deployment as, automatic weapons at the ready, they spring from cars or survey the open sidewalks that must rapidly be crossed. Driving at high speed–sirens blaring amid traffic because any slowdown is dangerous–they are seen in tense close-ups within their cars or followed through aerial shots that give a sense of unavoidable destiny surveying and dominating the trapped scurrying of human beings. Ennio Morricone’s throbbing, restrainedly percussive score accentuates the restless, unsettling drive of the film.

The expressive device of seemingly humdrum events triggering terror provides some of the film’s most frightening moments. Passing a car parked by the side of a country road becomes an ordeal, since it may contain a bomb. When there is a malfunction of a hand-held remote control device that normally raises the garage gate of the judge’s office building so that they can speed inside without slowing down, it feels like possible sabotage intended to force them out of their cars into open space. The editing quietly suggests threat in sequences that at first seem calm interludes: Andrea’s small son strikes his father and mother, as they stand kissing, with the cork bullet of a play gun; a shot of a bodyguard sitting and smiling cuts to a menacing view of police weapons being fired on a practice range; the doorbell rings during a dinner at Andrea’s house which marks a new level of comradeship between the judge and his carabinieri and, when the door is guardedly opened, the camera closes in on a clip of bullets taped outside the door as a Mafia threat.

But the viewer’s apprehension, maintained with a breathless, unremitting elegance, never finds the expected violent release. The final, successful assault on Judge De Francesco and his remaining bodyguards is accomplished not through bullets but through words on paper. They have discovered the name of the local capomafia and his illegal control of water rights in the city (one of the traditional goals throughout Sicily of Mafia power politics) and De Francesco has initiated seizures of documents when, in turn, a document is delivered to his office ordering his transfer out of Sicily. As Andrea, the head of the escort, reads the words, the camera moves up over a partition and in a long, continuous tracking shot that follows one person, then another, it reveals most of the bureaucrats we have earlier met who, through self-interest and fear, permit the Mafia to flourish, and who have now helped to close off De Francesco’s mission.

The reading continues over future time–quiet words that do the work of gunshots–as the judge and bodyguards are seen, by night, leaving the bunker-like apartment into which De Francesco has moved. Then they set off on their final ride together, with the music mourning, for the harbor, where they embrace with strong, restrained feeling and we learn that the bodyguards have been reassigned to menial, tedious duty: We see them through De Francesco’s eyes, growing smaller, on the dock in the darkness. In a practical sense, nothing has been accomplished–only the creation of human bonds and the memory of them retained.

They have been defeated by the modern Mafia, skilled not only in hogging water rights, in terror and in murder, but also in technology. (One anonymous mafioso has earlier amused himself by telephoning Angelo at a wiretap location to show that he is overhearing everything.) In this regard, the recent election of a rightist coalition in Italy–with Mafia support (for the straightforward reason of getting opponents out of power) apparently going to the neofascists in the south–is likely to turn back the tide of Mafia investigations.

La Scorta takes a very contemporary place among the body of Italian films on crime and corruption in the South. Within probably the greatest of them, Francesco Rosi’s Salvatore Giuliano (1962), its action set in the Forties and early Fifties, the bandits and Mafia of Sicily moved in clear black and white through the sharp visual contrasts of the island–bright sun and dark clothes, blinding white houses and tiny darkened alleys–carrying their complex motives and loyalties. In La Scorta, motives and loyalties are clear or become clear, but everything else–hope, safety, honest memory–is tangled in shadows, true perhaps now not only of the South but also of Italy itself.